New video with sexy youtubers published on our website sexe-libre.org

Let’s take a look at my new workspace

There’s a question I get asked a lot by friends, colleagues and audience members at conferences. There are variations, but they all go something like, “How do you find time to do everything that you do?”

I usually just answer with something like, “I never sleep” or “I don’t know. I’ve always done a dozen things at once.”

You might be surprised to know I’m a procrastinator. Not about everything, but if it’s something that can be put off, there’s a good chance I will put it off. That’s been the case for the past year whenever the topic of rearranging my office came up.

Some of you know I moved my office from a tall building in West Knoxville, Tennessee to my home one year ago. I did what most people do when they move offices: I packed and moved everything as quickly as possible, not giving much thought to what would be most conducive to long-term productivity.

My workspace consisted of a desk with a 27-inch iMac, keyboard and mouse. “Not bad,” you might say. But as my workload increased, it quickly became obvious that I needed to give serious thought to ways to increase my efficiency.

Sure, I hired some more folks to help. That was the easy part. But my work requires a lot of attention from me, and if I was going to get everything done required to run three growing businesses, I had to find ways to get more done with less effort.

So, in February (2019), I took some time to give some thought to ways to increase the efficiency of my work. I’d been putting it off for a year, but it was time to put some serious effort into creating a workspace conducive to productivity.

My work is compartmentalized into several areas. I spend a lot of time writing columns and books. I also spend a lot of time overseeing the production of books by other authors. This includes going over the work done by editors and layout staff, going over their work before it is finalized on the page, as well as sometimes doing the layout of a book myself. I also spend a good bit of time creating material for webinars, conferences and marketing.

As I examined my day-to-day workflow, I realized I spent a lot of time moving back and forth from one application to another. When finalizing the pages of a book, I would go between the editor’s notes in Microsoft Word, the text in Adobe InDesign, and the graphics in Photoshop.

If I could have everything on the screen at once, I surmised, I would save a significant amount of time shifting between applications.

I also realized I was spending more time than I should waiting for things to happen on my iMac. They say time is money, and they’re right. It doesn’t take long to make up for the expense of a faster computer. With that in mind, I bought the fastest Macbook Pro available. To deal with the screen space issue, I purchased a wide-screen 33-inch monitor.

Things Begin to Speed Up

For about a week, I worked with the new Macbook, connected to the 33-inch monitor, along with a Bluetooth mouse and keyboard. Things sped up significantly. I could get two InDesign pages side by side on the wide-screen, plus a page from Microsoft Word beside them.

It dawned on me, however, I was still losing productivity because having so many pages on one screen required me to keep them small enough to see everything at once. It worked, but I still had to put out more effort than necessary to work between documents. Sure, I could run Photoshop on the new Macbook Pro monitor, but it was too small for much of the work I was doing. 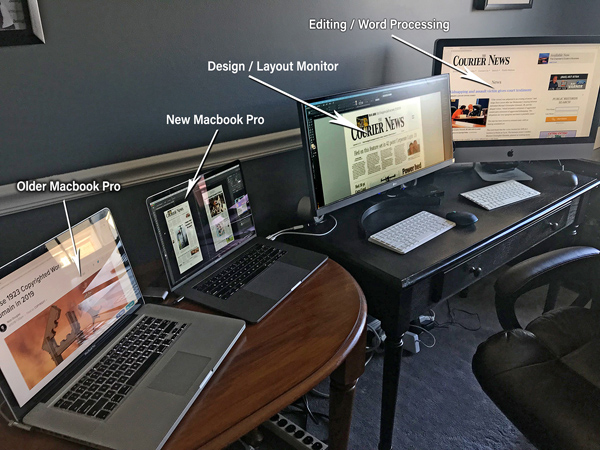 That’s when it dawned on me. I was just about to order yet another monitor when I realized I had my old iMac sitting on a desk in another room, just taking up space. I moved a second desk into my home office, directly next to the first. This allowed me to use my Macbook Pro, 33-inch monitor, and iMac all at the same time. Everything was coming together.

I began using the 33-inch monitor exclusively for InDesign pages. I could place two pages side by side and see them clearly. On the iMac, directly to the right, I installed Microsoft Word, and use that Monitor almost exclusively for looking over editor’s notes in Word, while editing the InDesign files at the same time. This also left room on the Macbook Pro screen for quick edits in Photoshop or other tasks.

Another area of my work requires me to send out email blasts on a regular basis. These go to webinar attendees, marketing contacts, and publications that carry my syndicated columns. I had used the iMac for email blasts, but I quickly became addicted to having the iMac screen available for editing work. That’s when it hit me: Why not get my old Macbook Pro out of its case and put it to use? It’s now used for email blasts, as well as other tasks that come up from time to time.

What Is Worth the Effort?

How much has my productivity increased since reconfiguring my desktop two weeks ago? I haven’t run any official tests, but I can assure you the answer is, “a lot.”

In the early 90s, when I opened my second business – an ad agency – and computers were much slower, I found myself waiting…a lot. That’s when I got the idea to set up a workspace with three computers. One was on my right, one was directly in front of me, and the third was to my left. I had a chair that would spin around, allowing me to work on one computer while waiting on the other two computers to finish their tasks.

I guess things haven’t changed that much. Sure, computers are a lot faster, but so is the demand for output. If I can increase my productivity by 30 or 40 percent simply by updating or adding hardware or software, you better believe I’m going to do it.

If you’re reading this column, there’s a good chance that you publish a newspaper. Here’s my advice: Don’t skimp on hardware and software. Updated software, more screen area, and faster computers pay for themselves in no time.

No one buys my hardware or software for me. It comes directly out of my pocket. So, when I pay for the latest version of Adobe Creative Cloud for my staff or update equipment, I do it because it more than covers the initial investment in increased efficiency.