Kevin considers the options when asked by a Tennessee publisher

While meeting with publishers one-on-one at conventions, the conversations run the gamut of running a newspaper or newspaper group. Over the weekend, while at a newspaper association convention in Oregon, publishers arrived at our scheduled meetings with questions about structuring groups, designing pages and increasing revenue, among other topics.

I will be with my Tennessee Press Association friends in Franklin this week and I hear we have a list of publishers scheduled for one-on-one meetings. One publisher, Dale Gentry, was nice enough to email and give me advance notice of our topic of discussion. 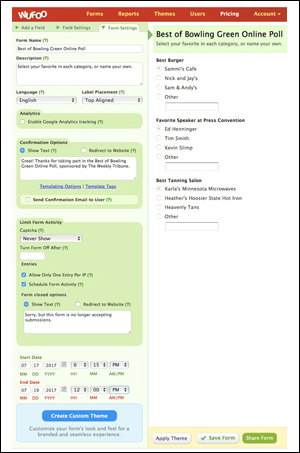 Creating an online form with Wufoo is very intuitive.

He wrote, “We’re going to be doing “The Best of Jefferson County” in the fall, and I wanted to get your input on the best way to tabulate votes. Our concern with an online survey is readers voting more than one time.”

Fortunately, I’ll get the chance to meet with Dale before he sees this column, so I’m not giving away all my secrets in advance by answering his question here.

I’ve had the opportunity to do a lot of online polling. If you’ve filled out a questionnaire related to my newspaper research in the past, you’ve seen examples of these polls.

In the past, I’ve used Survey Monkey for most of my polling. The paid version gives the user a lot flexibility concerning data collection. In my research, it’s important that no one “stuffs the ballot box” by sending in multiple responses to the same questionnaire. Survey Monkey makes it easy to create a setting to keep that from happening.

Earlier this year, my form creation needs increased, so I took a look at other options besides Survey Monkey and came up with an application that has become my favorite: Wufoo (wufoo.com).

Wufoo is an online form builder that provides the tools to easily design and build these forms intuitively, using your own colors, logos and other elements. Two features sold me on Wufoo, its ability to easily integrate online payments with forms and its ease in copy-and-paste code snippets, which allow me to place the form directly on the page of website, rather than creating a link to an external page.

An additional benefit of Wufoo is its ability to quickly create simple forms for various uses. For instance, a few days ago I was looking for the best way to create an “unsubscribe” button for my email blog. It dawned on me that I could create a simple form in Wufoo to allow the user to click on the “unsubscribe” button at the bottom of the blog and send the necessary data to form database.

I’ve also found Wufoo valuable when creating a simple online marketplace. For instance, I was receiving a number of emails asking how to order an autographed copy of a book that was recently published. Wufoo works with most payment software. A little research led me to move my online customer payments from PayPal to Stripe, simply because Stripe integrates directly with Wufoo.

What this means to my customers is they can go to my website, complete a form right there without having to go to an external link, and make a payment without being transferred to PayPal or some other site. It all happens right on the original web page.

That’s more information than Dale needs to prepare for his upcoming reader’s poll, but once he begins using Wufoo, I’ve got a feeling he’ll use it in ways he never previously imagined.

Check the wufoo.com website for various plans. I’ve found Wufoo is definitely worth the small monthly fee I pay.