So, what do professional speakers do during a pandemic? I can’t speak for all the speakers in the world, but among other things, I’ve been leading a lot of webinars.

I guess it shouldn’t surprise anyone that attendance at online classes has been high over the past couple of months, which means I hear from a lot of folks at newspapers and answer a lot of questions. In this column, I thought I’d answer some of the questions I’ve received from newspaper folks.

Wonder what colors are most popular in advertising this year? Classic Blue and Living Coral top the list.

From Renee in Alabama: It was really interesting to learn about the most popular colors for ad design this year. Where can I find this information in future years?

Kevin: The popularity of colors always fascinates me, as popular colors change from year to year. If you’re still using reflex blue and green, it might surprise you to know you’re probably not getting as much response from your ads as you might. Pantone releases a list of most popular colors each year. In 2020, the most popular colors on Pantone’s list is “Classic Blue” and “Coral.” If you don’t believe it, just walk into any clothing store.

From Steve in Indiana: When it comes to the size of a PDF file, is there a mathematical progression based on what the size of the printed PDF would be? Or is it dependent upon the content of the PDF? For example, would a PDF with mostly text be a different size file than a photo, or one with simple pie charts?

Kevin: I used to get this question a lot back in the early days of PDFs, Steve. Primarily, the size of a PDF is determined by graphics on the pages. Large graphics with high resolutions created much larger PDF files. Users sometimes believe when a file is downsampled during the PDF creation, it lowers the resolution of all the images to the setting of the downsample. It’s actually more of an average (not an exact average) between the original size of an image and a downsampled size. For example, if you place a 10-inch photo with a resolution of 300 on a page and reduce the size to 5 inches with a downsampling of 220, the image in the PDF will still be well over ten times as large as it would have been if the size and resolution of the image was correct before it was placed on the page. 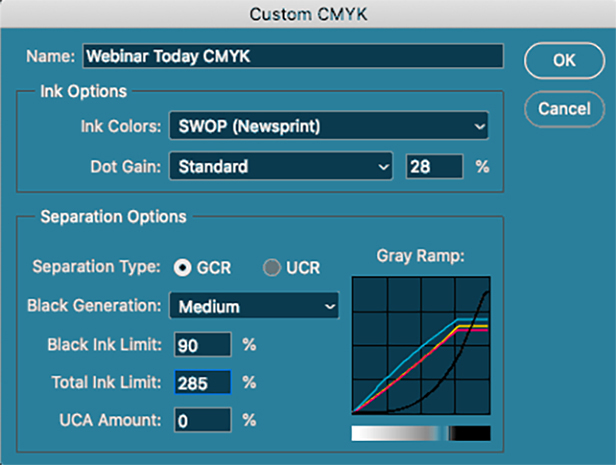 Color settings in Photoshop should be optimized for newsprint for printed photos.

From Blake in Texas: Do you have any general instructions on best settings in Photoshop for photos printed on newsprint?

Kevin: There’s no “once size fits all” setting for newspapers, but I can suggest settings that work well on most web (newsprint) presses. In Photoshop Color Settings (Edit>Color Settings), set your CMYK settings to Black Ink Limit: 90 percent, Total Ink Limit to 285 percent, and dot gain to 20 percent. Set your RGB setting to “Adobe RGB” and your grayscale setting to “Dot Gain 30%”

From Deb in Ohio: Is there a way to save InDesign paragraph styles so they can be used on another computer?

Kevin: Interestingly, as much as most of us use InDesign, this is a question I get asked a lot. Yes, it’s like a lot of functions in InDesign that can be ported from one computer to another. First, save the InDesign document that contains the style on a server, so other users have access to it. Go to the new computer and be sure InDesign is open, but no documents are open. Finally, with no documents open, go to the menu in the Paragraph Styles Panel and select “Load Paragraph Styles.” Select the InDesign file you placed on the server and the styles will be immediately loaded in InDesign and available whenever you create a document. 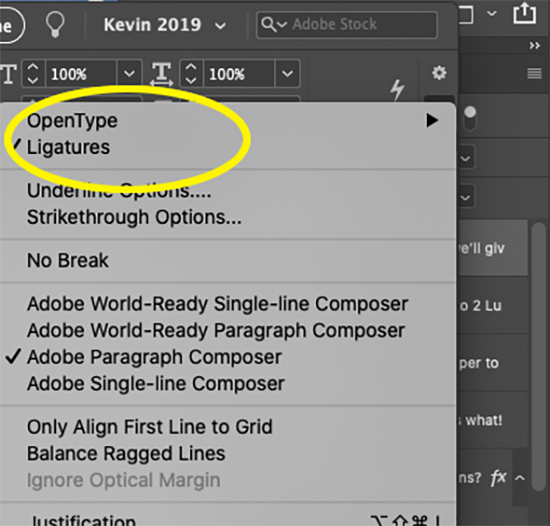 Getting rid of ligatures should be near the top of everyone’s InDesign to-do list.

From Kelly in North Dakota: I moved all my fonts over to my new computer, but particular fonts are now turning on ligatures automatically. This is causing issues since ligatures show up as CID fonts when converted to PDF and cause all kinds of problems. Is there a way to make this not happen?

Kevin: Yes, Kelly, there is. Open InDesign, and be sure no documents are open. Select your type tool and click on the tiny menu in the upper-right corner of your InDesign desktop. Uncheck “Ligatures” and you should have no ligatures whenever you create a new document. If you have templates that have this problem, be sure to open them, uncheck “Ligatures” and save the template. This should take care of your problem with ligatures.