CNN journalist Christiane Amanpour, whose reporting on violence and human rights abuses in Iraq, Bosnia and Syria has earned her worldwide respect, has been named the 2019 winner of the Zenger Award for Press Freedom by the University of Arizona School of Journalism.

Amanpour will be honored Friday, Sept. 20, at a public reception and lunch at 11:30 a.m. at the Marriott University Park Hotel, 880 E. Second St. 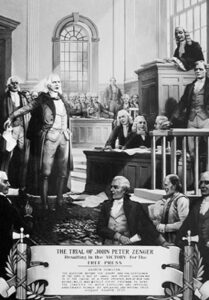 The University of Arizona School of Journalism is one of only about 100 fully accredited journalism programs in the nation. Its classes range from traditional reporting skills to internet research and computerized graphic design. Its two newspapers, the local edition of The Tombstone Epitaph and El Independiente, the nation’s only student-run bilingual newspaper, are unique in American journalism education.

The Zenger Award is named for a husband and wife team of pioneering journalists.

John Peter Zenger was editor of the New York Weekly Journal in 1734 when he was jailed by British colonial authorities on charges of seditious libel. He had criticized the corrupt administration of New York’s governor, William Cosby. While Zenger was imprisoned, his wife, Anna Catherine Zenger, continued to publish the newspaper.

Zenger’s subsequent trial and acquittal is considered a landmark case in the history of freedom of the press, paving the way for the American Revolution.

2014 — Paul Steiger, the founding editor-in-chief and CEO of ProPublica

2001 — Lou Boccardi and The Associated Press

1993 — Jane E. Kirtley, Reporters Committee for Freedom of the Press

1979 — Jack C. Landau, Reporters Committee for Freedom of the Press