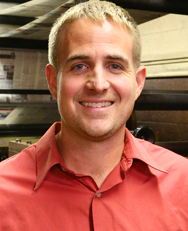 Kyle Larson, General Manager of Larson Newspapers (Sedona Red Rock News, Camp Verde Journal, Cottonwood Journal Extra) has agreed to step up into the role of president of Arizona Newspapers Association for the 2018-19 fiscal year. He will be replacing Manuel Coppola, who proudly served two successive terms as president.

Larson graduated from the University of Arizona with a Bachelor of Science degree in Business/ Managerial Economics in 2004. He is the third generation of the Larson family to run Larson Newspapers. He has enjoyed the many challenges and successes of running local newspapers, as an Assistant Managing Editor, Production Manager, Advertising Sales Executive, Advertising Director, and currently the General Manager of the family company which publishes the Sedona Red Rock News, The Camp Verde Journal, and the Cottonwood Journal Extra, and he looks forward to running it for the next 30 years.

Outside of the day to day newspaper work, he has served numerous nonprofit boards, and has served on the ANA board for the past four years as a director, vice president, and is now humbled to be able to serve our board and members as president. “It’s both an honor and a privilege to be called upon to take over the reins of the organization.”

Dealing with hundreds of businesses weekly and many other newspapers across the state is a huge asset, and he believes the key to success for the organization and its members is to harness the power of all of our members, small and large. Member retention and revenue growth are keys to the growth of the organization.

As any ANA member knows, it’s always a tough time being in the newspaper industry, but it’s not all doom and gloom. “With the right plan of action and attitude, we can accomplish our organizational goals, and with the right board and a trained staff we can get back to where we need to be” Larson said.

2018 has been an interesting year of ups and downs for ANA.

Many members have noticed that 2018 has been a very strong advertising year for ANA. We were graced with a very large Clean Elections Campaign advertising buy as well as other advertisers that have stepped up their network buys which increased our revenue.

This increase is a very welcome change. However, we all know that change is a vital part of life, one thing is for sure, this year will bring plenty of change, both good and bad.

Without a doubt the largest change will be the retirement of current and longtime executive director Paula Casey. Paula has served the organization for more than 20 years and will surely be missed by the staff, its members, and the board of directors.

Paula is a vital organizational asset that’s not easily replaced — yet, that’s what we will be tasked with in the next few months. The board has placed two main priorities on the new director: increasing our membership, and gaining new revenue streams for the group and its members.

Lastly, there will be a physical change. After 23 years in the same office space in downtown Phoenix, we will be moving our operations to a new location. Along with this move comes the sorting and safely disposing of more than hundreds of boxes of legal documents, paperwork, and old newspapers; as well as purging unnecessary materials from our longtime storage facility.

Yes, the next 12 months will be a crucial one for the organization and its many members and there will be many challenges faced both inside and outside the group. It is times like these where newspapers need to band together and form a stronger bond with each other. When we do that there is no public notice issue, revenue issue, or political issue that we cannot tackle.