Public notices: Under attack in the legislature

Long before transparency was the catch phrase of government watchdogs, Arizona newspapers have been the primary fighters in the battle to keep government records open to citizens. In the last few years, the transparency fight has moved to protecting the public’s right to know by keeping public notices in newspapers.
Newspapers have historically fulfilled the important role of providing notice to the public on such things as upcoming public hearings, proposed tax increases, ordinance changes, zoning changes, budget proposals, school district information, and many, many other important government actions and information that impact people’s rights and lives every day. Importantly, newspapers do this while providing independent, third‐part verification that this information is actually being made available to the public.

Rep. David Stevens, R‐ Sierra Vista, has introduced legislation (HB2403: PUBLIC NOTICE; INTERNET) which would allow internet posting in lieu of newspaper publication. If enacted into law, this bill would have a hugely detrimental impact on the public’s right to know.
In its current form, the bill would allow government to publish public notices in a newspaper OR to post notices anywhere on a “worldwide public network of interconnected computers”. This option would allow government agencies to post important information only on government websites – information that is now pushed out to the public along with local news in the local newspaper, on a newspaper’s website and on a centralized statewide website – publicnoticeads.com – a database of all public notices published in newspapers across the state since 1998.
Why is the bill calling for notices to be provided in either print OR online when newspapers are currently publishing these notices in both print AND online?
Every time a newspaper publishes a public notice, the same notice is also posted to the individual newspaper’s local website and further uploaded to an aggregate, centralized website hosted by the Arizona Newspapers Association www.publicnoticeads.com ‐ at no additional cost to taxpayers. Local newspaper websites are the most popular and most commonly viewed websites in their local communities – with visits dramatically overshadowing those to local government websites. Also, the free statewide website www.publicnoticeads.com received a staggering 1,850,000 page views in 2011 alone. 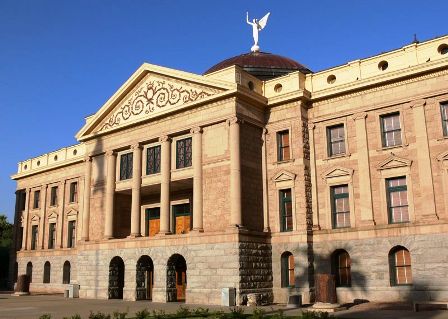 Simply put, the current system is working and working well. These notices are reaching Arizonans in both print and online. Moreover, government has no business taking over a function currently being performed very well and cost‐effectively by Arizona’s newspapers – thus taking private jobs and giving them to government‐ especially during these tough economic times when jobs are so critical. There are other reasons to preserve printed notices. Regardless of recent advancements in technology and the proliferation of internet use, the fact of the matter is that it is premature to consider moving all public notices to the internet exclusively.
In Arizona, there is a significant disparity in internet access among various regions and demographics. For example, it is well known that older citizens do not use the internet like their younger counterparts – and many do not even own computers or use the internet at all. Moreover, reports have shown that as many as 45% of minorities are without internet access. To illustrate the point, a newspaper publisher from the Navajo Nation previously testified at the Legislature that his community does not even have running water or electricity, let alone access to the internet. As a result, moving notices exclusively to the internet would disenfranchise many Arizonans.
Another critical issue that seems to be lost in this discussion is that public notices, also known as legal notices, have a very real, legal significance. When published under the current process, newspapers are able to produce an archive of all notices printed and can produce valuable affidavits as authentic proof that the public was noticed. If notices go solely to the web, there is simply no way to prove that a notice was actually posted. In fact, the U.S. Library of Congress is currently grappling with this issue and has yet to find an answer.
Experts agree that there are four elements that mark a valid public notice:
(1) the notice must be published by an independent party
(2) the notice must be capable of being archived
(3) the publication must be accessible
(4) the publication must be verifiable
If any one of these elements is absent, the notice SIMPLY cannot be properly authenticated and IS subject to challenge.
The public must also be able to verify that the public notice was not altered once published – something that is simply not currently possible on the web. As we all know, websites are commonly hacked, go down for various reasons and website content can be changed. When published, however, an affidavit is provided by the newspaper, which can be used as independent, third party verification that the notice was made and proof of the true copy and exact text.
Does anyone among us trust government to police itself when it comes to notifying the public with respect to information important to the public? If HB2403 were to become law, that is exactly what would happen. Take for instance a recent case in Santa Cruz County: In 2008, the county was allowed to post their minutes to the County website instead of publishing them in a newspaper. As a result, in 2009 Santa Cruz County posted the minutes of only six of 48 meetings ‐ and none since Feb. 2009. Not surprisingly, budget and staffing challenges were the stated reasons for non‐compliance. What do you think will happen if they are required to post all notices online?
Lastly, the amount of money government spends on these notices is a very small part of the overall budget for cities, towns and counties. In almost all cases, the government spends less than one half of one percent of their budget on this valuable service.
If you value printed notice and have an interest in protecting the Public’s right to know, please contact the members of the House Technology & Infrastructure Committee using the contact info at the following link: http://www.azleg.gov/CommitteeInfo.asp?Committee_ID=21.
Now is not the time to make changes to a system that works efficiently and cost effectively.
As they say, if it ain’t broke, don’t fix it!

Arizona Newspapers Association has been uniting strong newspapers for a better Arizona since 1939. Follow us for the latest journalism news and topics.

Do you know anyone looking for a change of scenery? Check out the careers in AZ - https://ananews.com/ana-members/jobbank/

Editors are needed in AZ. Experienced or 1st timers. Check out the jobs here: https://ananews.com/ana-members/jobbank/

Need a new gig? Check out the latest postings - https://ananews.com/ana-members/jobbank/